Our brain, the pattern machine

LearnThatWord is a program that helps students review words and learn their meaning and spelling through deliberate practice. As such, we're on the opposite side of what society and the educational system fancies to be "best practice" right now.
The new student, we're told, should study "smarter, not harder."

Practice is shunned. Teachers are rightfully frustrated by old and mindless approaches to "practicing" vocabulary. This makes the new gospel sound so wonderful:
That vocabulary will stick by itself if it's put in brilliant, impressive context.
That it will enter their students' brains automatically if only they teach more root words and etymology.

There's nothing wrong with these approaches. Problem is that their value and weight is starkly distorted, by the factor of ideology.

There is a lot of money to be made by selling "magic bullets," and a lot of schools, overwhelmed by a system in crisis, like to believe that there's an easy solution that requires less effort, less time, less discipline.
It is obvious that your brain will pay more attention if content is presented in an interesting context and meaningful fashion.
Key to success and vocabulary (and spelling) automaticity is deliberate practice.
There are no short-cuts.

Programs like LearnThatWord make the process faster, more entertaining, less arduous, and easier to manage, but a learner still has to go through the study cycle to become masters.
That's neuroscience. Your brain is a pattern machine. It does not process information based on logic or analysis, but by rapidly processing stored patterns. If you haven't built the patterns, you can't succeed at the task. And there's no other way to building lasting patterns than deliberate practice.

Here some succinct excerpts of a new book by Ray Kurzweil, How to Create a Mind: The Secret of Human Thought Revealed

"... I present a thesis I call the pattern recognition theory of mind (PRTM), which, I argue, describes the basic algorithm of the neocortex (the region of the brain responsible for perception, memory, and critical thinking). In the chapters ahead I describe how recent neuroscience research, as well as our own thought experiments, leads to the inescapable conclusion that this method is used consistently across the neocortex."

"My goal in this book is definitely not to add another quotation to the millions that already exist attesting to how complex the brain is, but rather to impress you with the power of its simplicity."

"Human beings have only a weak ability to process logic, but a very deep core capability of recognizing patterns. To do logical thinking, we need to use the neocortex, which is basically a large pattern recognizer. It is not an ideal mechanism for performing logical transformations, but it is the only facility we have for the job. 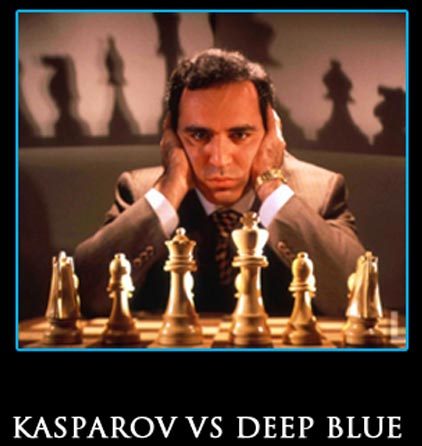 Compare, for example, how a human plays chess to how a typical computer chess program works. Deep Blue, the computer that defeated Garry Kasparov, the human world chess champion, in 1997 was capable of analyzing the logical implications of 200 million board positions (representing different move-countermove sequences) every second. (That can now be done, by the way, on a few personal computers.)

Kasparov was asked how many positions he could analyze each second, and he said it was less than one. How is it, then, that he was able to hold up to Deep Blue at all? The answer is the very strong ability humans have to recognize patterns. However, we need to train this facility, which is why not everyone can play master chess."

"Armed with his knowledge, Kasparov looks at the chessboard and compares the patterns that he sees to all 100,000 board situations that he has mastered, and he does all 100,000 comparisons simultaneously. There is consensus on this point: All of our neurons are processing -- considering the patterns -- at the same time."

While learning patterns through deliberate practice might seem "not smart," because it involves establishing a process and following it, our brain uses the pool of patterns it gains in this fashion to create truly amazing ability, creativity, and intelligence.

Without building the patterns first, however, higher level thinking is impossible.

One Response to Our brain, the pattern machine